Frontal Trust Webinar: “The Capital Market in the new Chile”. 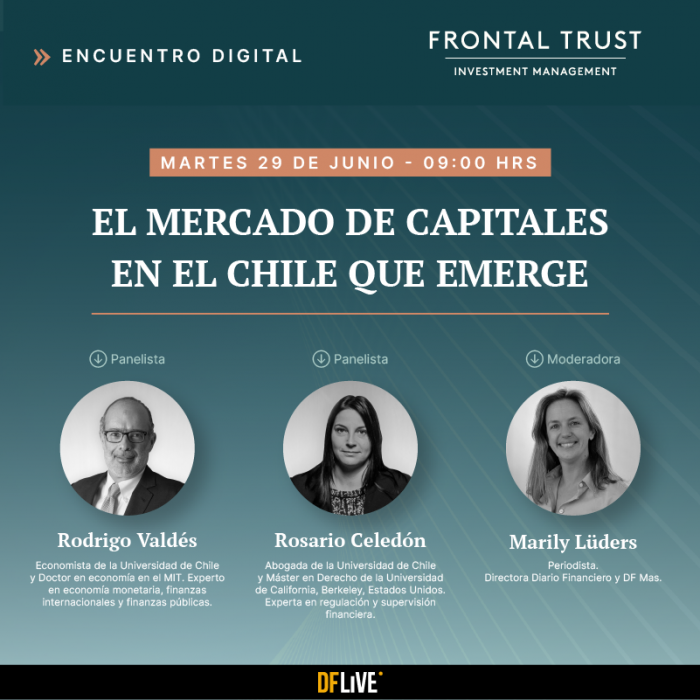 Without ignoring the strengths and soundness of the Chilean capital market, the panelists of the meeting “The Capital Market in the emerging Chile: scenarios for the coming years”, Rodrigo Valdés and Rosario Celedón, coincided on the need to open up to a much broader ecosystem, where initiatives such as Fintech and digital means of payment fit. The important thing, they warned, is to evaluate well the risks that are appearing.

On Tuesday, June 29, Rodrigo Valdés and Rosario Celedón, experts in financial regulation and public finance, spoke with the director of Diario Financiero, Marily Lüders, on the impact that the upcoming presidential elections and the constitutional process could have on the Chilean capital market. They also analyzed the scenarios that are envisioned in economic matters and made proposals to strengthen the savings, investment and financing ecosystem in our country.

In the first part, the lawyer of University of Chile and former commissioner of the Financial Market Commission, Rosario Celedón, pointed out that “one of the strengths of our financial system is the robust institutional framework and the solidity of the regulators and technicians. This is something we have to take care of beyond future political scenarios”.

The economist, former Finance Minister and director of Frontal Trust, Rodrigo Valdés, pointed out that there are some foreseeable things in the Chile for the next five years. “One of them is that we are going to have a fiscal issue due to spending demands. We will have a higher debt. It’s also pretty clear that we’re going to have a higher risk premium, higher average returns and a slightly more difficult environment for doing business, but not impossible. Ultimately, interest rates will be higher.”

Quite confidently, Valdés added that “pension funds are not going to be nationalized, something that was not that obvious a month and a half ago. Today it is clear that we are not going to go to a solution like Argentina’s in terms of pensions. Likewise, we are going to have an autonomous Central Bank in the Constitution. In the case of the Central Bank, the biggest risks are that it will have a dual mandate or that there will be constitutional accusations from Congress, but if they are done well, it may not be a problem.”

In relation to the programs of the presidential pre-candidates, Rosario Celedón said that there was less focus on capital markets issues than in the programs of other election processes. “You can see a lot of issues of promotion and support for entrepreneurship, maintenance of Fogape, reviewing the role that Corfo can have as a second-tier bank, or support for venture capital. In the end, what we are talking about is that the financial system should have new actors who, through competition, can advance in financial inclusion”.

Valdés added that “Jadue’s program is the most worrying because he does not properly understand the role of the Central Bank, but in the other programs the risks are more limited”.

One issue that caught the attention of the attendees was the future of the pension funds. Valdés pointed out that “I do not see that 100% withdrawal will be approved, the stock will not be touched. But it will be managed differently. For example, if we have a contribution rate of 16%, I doubt that 10% will go to individual accounts. What I do see is a fourth withdrawal”.

The digital meeting, which was attended by more than 300 people, lasted one hour and was broadcast live on Frontal Trust’s digital platforms and the Diario Financiero website.